Taking Off The Gloves: H4H Runs the Boston Marathon

“So, why are you fighting?”

That’s the question that’s asked of each new boxer when they commit themselves to step into the ring to do battle against cancer as a part of Haymakers for Hope.  The responses we get are pretty wide ranging, but after more than 5,000 personal testimonials, I can say that they can typically fit into three categories. Many are fighting in memory of a loved one.   Others are intrigued by the challenge and want to step into the shoes of a boxer, even if just once, while also making a difference towards a cause that they are passionate about. And then there are those who have always wanted to raise money for cancer research, care, and awareness, but thought the only way to do so was to step into the shoes of a marathon runner, shoes that, for them, were not quite their style.

Before starting Haymakers, I was among those in the last category.   While I didn’t have an immediate family member impacted by cancer, it was still a disease that impacted many of those around me, including a childhood friend.  I knew I wanted to do something to help, but didn’t know what that thing would be, especially because the most common method, running a marathon, was something that I honestly had very little interest in.   And I suspected that I wasn’t alone in wishing there was some other way to help.

When I first moved to NYC in 2007, I was lucky enough to fall in love with the first gym I walked into. I encountered Trinity Boxing Club at a time in my life when I needed it most. I had just moved to a new city, didn’t really know anyone, lived with random people from Craigslist, and was working a very intense job that was averaging somewhere between 60-80 hours a week. Trinity Boxing Club saved me. It became my place, and the people in it became my NYC family.  The gym itself was a far cry from an Equinox, but to me it was perfect. It had grit, charm, and looked like it was right out of a Rocky movie. I met some of my best friends there and was motivated to go every day, no matter how late I worked the night before. Being there made a part of me come alive. That I would become completely addicted to boxing felt like a foregone conclusion.

Then, in 2007, I met my now co-founder, Julie Kelly, at Trinity Boxing.  Like most of the people there, I gravitated towards her immediately. She had this magnetic personality, but also out-worked all of us who were in the midst of becoming boxers.  Not only did she out-work us, but she even out-worked the pros there. She was good. Like, really good.  I had become part of a hardcore group of people who were training nearly every day and making great progress, but nothing like Julie.  She went from picking up gloves for the first time to being mistaken for a pro boxer (by Roy Jones Jr. nonetheless!) in what felt like no time. I worked hard, sure, but not as hard as Julie Kelly.  She pushed all of us to be our best.

Julie and I instantly became friends. As the only two Massholes at a gym planted firmly in Yankee-land at a time when the Red Sox and Yankees rivalry was at its peak, we naturally gravitated towards each other.   In fact, the very idea for Haymakers for Hope was hatched when Julie shared with me that she was a cancer survivor. The more we delved into her experience, the more questions we found ourselves grappling with. If people are able to fundraise for their own marathon training, could a model exist for raising money through our shared boxing training?  Could we literally fight for a cure? And if we were able to do so, were there other people out there who were willing to get punched in the face for the same cause? 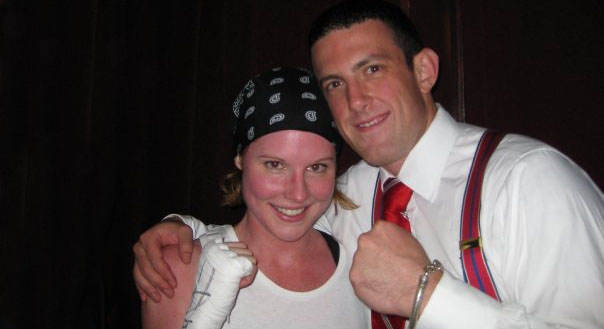 When we first started H4H, we didn’t know if anyone would sign up.   I would bug every single person I knew to take a swing at stepping in the ring (let’s be honest, I still do...) and hoped that they would have the faith in us to believe that this was going to be a meaningful, once in a lifetime experience that was worth all the work. Slowly but surely a community started to build around our idea, and today we’ve been lucky enough to find ourselves surrounded by an amazing group of alumni and supporters. Every person who has gone through the H4H program serves as a daily inspiration for me.

I believe I found Trinity Boxing at the exact right time in my life, just as I feel that most of our fighters have found Haymakers at the exact right time in their own lives.  People lead busy lives, and it’s hard to fit in something that ostensibly becomes an additional job into an already filled schedule. But people find a way. When our fighters look back on the experience, so many have expressed how happy they are that they joined us and that they would do it again in a heartbeat.  It’s an experience that forces you to put yourself in an uncomfortable situation, but I truly believe that it also serves to help people come out on the other end of their fight as a better version of themselves. 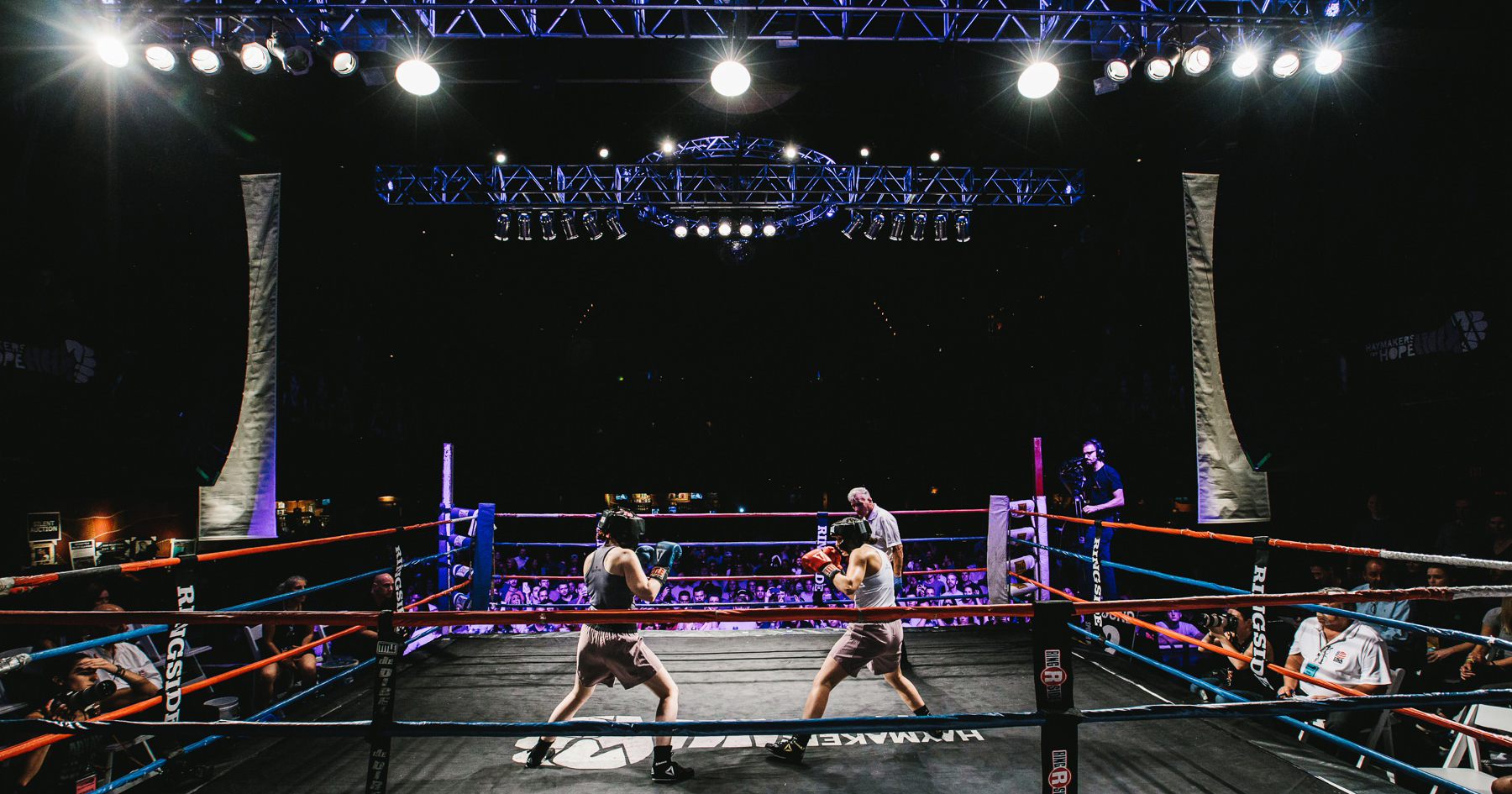 Over the years we’ve seen this manifest in many different ways. Whether it’s losing weight and keeping it off, becoming a better parent or spouse, or gaining new perspectives about life that allows one to simply become a happier person, every fighter undergoes a transformation of some kind. I’ve even had the opportunity to see individuals with whom I spent my childhood sign up and commit themselves to our program. It has been amazing for me to witness their journey, but also to have the opportunity to become acquainted with the wonderful and complex adults these old childhood friends have grown into.

As our community has grown, we find more and more alumni finding that their fight served as a sort of re-set experience for their life.   Many have turned to us in an effort to find the next challenging experience, one that will push them outside their comfort zone and further their personal journey while also providing them an opportunity to continue to raise money to help us to scale our impact.  However, alumni aren’t the only ones seeking to help. As our community keeps growing, we find ourselves receiving more and more inquiries from people beyond our immediate base who love what we do and want to support us, but for a variety of reasons are not able to fight.

We have proven that Haymakers is successful in its mission to challenge and push our participants to their limits, to scale its fundraising potential to millions annually, and to catalyze change.  Through Haymakers, we have found an unconventional way to link two seemingly unrelated things – boxing and the fight against cancer – and to transform them into a highly successful vehicle that has direct and indirect social impact.  Our community has grown, and with that growth, we now seek to expand the scope of what we do to provide people with amazing experiences that serve a social good.

So naturally, 10 years later, here I am, about to do the only thing that makes sense to me in order to open up our mission to include those who are unable to fight.   In a sense, I am setting out to do the thing that I started Haymakers for Hope to avoid doing: run my first marathon. I am setting out to do so alongside my co-founder Julie and five other H4H Alumni as part of the inaugural H4H running team. We were fortunate enough to acquire bibs for the 124th running of the Boston Marathon, and I realized that if I was willing to literally fight for a cure for cancer 10 years ago, then it was time to face that nagging fear and run 26.2 miles for a cure.  This is something I never thought I would do, but then again, I didn’t grow up thinking I would fall in love with boxing, and I certainly never saw my career taking the turn it did to Haymakers. Life can be funny like that.

We’re about 6 weeks into training and I have to say, I am absolutely loving it. I’ve been waking up at 4:30am everyday to run and train, and so far in 2020, I’ve run more miles than I’ve driven!  I find myself obsessing about gear, my training plan, how I’m going to fit in my workouts around the responsibilities of work and home just like I used to obsess about my boxing training. We have a fantastic team of Haymakers alumni, a great coach, and we are having a blast.  I fell in love with boxing and Trinity Boxing Club in 2007 and now I’m falling in love with running and training again in 2020 as we prepare for the Boston Marathon.

Going through the Haymakers journey can be a life changing experience for our participants, but without a doubt it’s also been a life changing experience for me. Over the last ten years the organization has meant so many things to me, and I owe so much of my personal and professional growth to the organization. I’ve made amazing friends, witnessed some amazing mental and physical transformations, and am continually blown away by the good that this community is capable of having on the world. I honestly can’t believe it’s been ten years and I couldn’t be more excited for the next ten and what they bring!   Thank you to everyone who has made Haymakers their own in ways both big and small, and I look forward to seeing where this incredible journey takes us all next.