Steve Gill’s wife Gina is not into fighting.   Not by any stretch of the imagination.

“She’s the kind of person who can’t even watch fighting on television,” Steve says, “She can’t watch a movie that has someone getting hit.   We watch happy comedies all the time because we can’t watch anything else. If I’m watching Game of Thrones, she can’t even be anywhere around me or see anything.”

So to hear Steve describe what he remembers from being in the ring on November 15, 2018 is nothing if not hilariously unexpected.

“In the second round, I was bleeding.  A lot. I’m a bleeder. I’d get popped in the nose with a jab and I’d just start bleeding.  After getting hit a few times, I went over to the doctor at the side of the ring to get patched up.  There’s blood from my nose. A cut under my eye. I’m totally fine, but just bled a lot. I couldn’t help it.”

He compares that moment to a car crash from a movie.   Everything slows down. Hundreds of people scream at him from the side of the ring, but their shouts seem distant, miles away.  Lights flash. The referee’s hands wave in slow motion. He sees his father, his brothers, his friends and coworkers shouting their support from a nearby table outside the ring.   Steve’s mother desperately attempts to throw cloth napkins from the tabletop into the ring to stop the fight as Security gently discourages her from doing so. She ignores them, and tries to send the place-settings flying over their heads.  Steve recalls feeling like he was outside of himself, barely sure of what was going on.

It was then that a blurred figure walked across the ring toward him and came into focus.

“KICK HIS ASS!”  she bellowed to her husband in a tone fit for one destined to one day seize and occupy the Iron Throne of Westeros.

Gina is a mother, and while it might not be of dragons, anyone with two children can certainly attest to the fact that it definitely can feel that way sometimes.   Their first child, Aidan, was a honeymoon baby. Steve and Gina were married in April and their son Aidan was born in February. They moved to the Jersey Shore and when Aidan was only eighteen months old, his little sister Amber came along.   Managing two children under the age of two is nothing if not stressful and to add to that, Gina began having trouble breastfeeding their daughter on one side. In trying to figure out what was wrong, she discovered another problem altogether.

Their daughter was less than three weeks old.

“We were in total shock,” Steve recalls.   “Everything that had come or was coming our way up to that point was a positive.   Marriage, a new home, the kids, I was starting my MBA. All great stuff. Just upper, upper, upper.  And then, like that…”

He doesn’t need to finish his thought.   As someone raising two children myself, it’s hard to find words that could accurately portray the crushing weight of adding something like a cancer diagnosis to an already full load.  And it wasn’t just one tumor. After a number of tests, there were revealed to be five tumors. While it may seem difficult to imagine finding the strength to confront this horrible new reality, Steve makes it clear that there was never any shortage of strength available to them.

“We both come from big families,” he explains, “not just size-wise, but support-wise.   We had so much support. Gina’s friends would fly in from California to help out, because they knew how difficult it was.   Her family, my family, my brothers and their wives. Everyone came to help. To not have that and go through something like this… it would have been tough.   I was going to get my MBA and I remember thinking it was all too much and I considered stopping, but Gina said no. Keep going. Don’t let this get in the way of that.   It will keep us busy. And she was so right. Our kids kept us busy. My school kept me busy. The busier we were, the less time there was to worry.”

“We had to keep moving forward.  That was important. Imagining her not being around for landmark events and weddings down the road was one thing, but what really kept us going was more immediate.   The kids growing up, five-six-seven-eight-nine-ten. There was that realization that we had to stay positive. And Gina is so positive. She has this super high energy and that’s just the way she thinks.   It was so good that she has that mindset.”

Despite Gina’s aversion to aggression and violence, now that she is cancer free, there wasn’t much she could say to dissuade Steve from taking on the challenge of getting in the ring to fight against cancer.   The way he saw it, as someone who had been affected by cancer, how could she not understand and support Steve’s mission to make a difference? She came around to the idea of course, even appearing in the ring between rounds on fight night, walking the perimeter of the ring with the round-card before making her way over to her husband to provide him with those three shouted words of support.  With Mom on board, I wondered to Steve how his children interpreted the photos their dad would show them of himself, his hair wild and his nose caked in blood.

“They didn’t really get it at first, but after showing Aidan pictures of me all bloodied, he wanted to come with me to a sparring session.  It was early on a Sunday morning and I took him to the Church Street Gym. It’s a well-known gym, but no frills. High ceilings. Smells like shit.  Hot as hell. Everyone is dripping in sweat and you can hear the trains rumble as they passed nearby, underground. It was wild watching him taking it all in, looking around the place.   Eventually, I begin to spar. He’s watching me in there, hitting, getting hit. I could see him actually getting it, what his dad was doing.”

“Aidan’s very reserved.  He’s sensitive. So for him to see me do that and to watch him get excited about it and see me do something that he had never seen me do before?   I was proud. I felt like I was showing him that I could do anything. Like, who am I do decide to do this? If I could do this, then I hope he could see that he could do anything too.”

And even though Aidan is equal parts his mother and father, I’d like to think that in that moment, watching his father fight, the side of him that he got from his violence-averse mother would shine through.  Not so much the part that can’t bear to watch someone throw a punch at another person, but instead the part that might bring him to whisper under his breath: 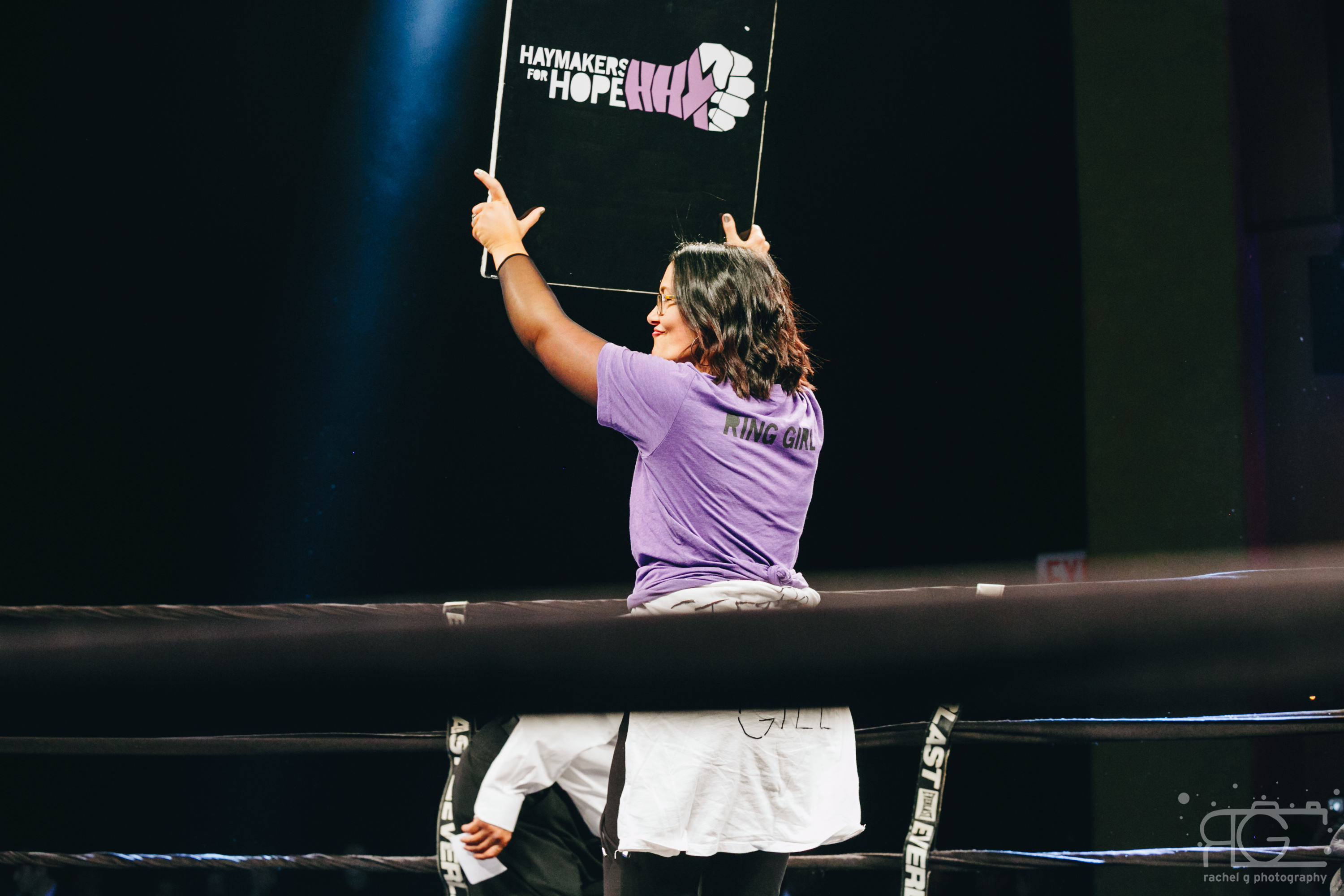